The Vinča culture is also called the Turdaș-Vinča culture or simply the Turdaș culture. Whatever name you give it its hard to write it on an American English keyboard because of the silly č and ș. Part of me wants to name my first son Çḩṙîṧẗöῥḫἐṟ so that he works on his handwriting and it is better than mine. The other part of me thinks that this would be unduly cruel.

Anyway, the Vinča culture existed in Southeastern Europe from around 5500 BC - 4500 BC, specifically in modern Kosovo, Serbia, Romania, Bulgaria, Bosnia, Montenegro, Macedonia and Greece. The origins of the Vinča culture are debated. Some think that they migrated to the Balkans from Anatolia while others think they developed naturally out of the rich Starčevo–Kőrös–Criş culture and were local to the area. Either way they were a Neolithic culture that farmed, made pottery, raised livestock and supplemented it all with hunting and gathering. The Vinča are best known because of the Vinča symbols we discussed earlier.  But when they weren't making pre or proto-language they were carving fantastic figurines.

The Vinča produced a number of fascinating sculptures, including the Lady of the Vinča. This idol, that dates to around 5000 BC was found near Belgrade in 1929. It shows a sophisticated craftsmanship. If you remember the Starčevo–Kőrös–Criş culture was a rich religious culture that was fascinated with fish gods. It produced troves of fish-men statues associated with a river religion. The Vinča seems to have continued in this religious vein, but switched from river deities to a fertility cult. 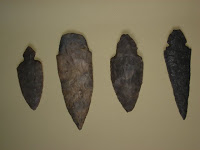 When they weren't practicing religion the Vinča were busy developing the first copper tools of Europe. The Vinča site at Pločnik in Serbia unearthed the earliest copper tools in Europe when people were setting up the railroad in the 1920's. Pločnik was inhabited from around 5500 - 4700 BC until the settlement was burned to the ground. But, before the fire took the settlement the people used fire to forge some great prehistoric weaponry.
Posted by Christopher Linehan at 7:54 AM