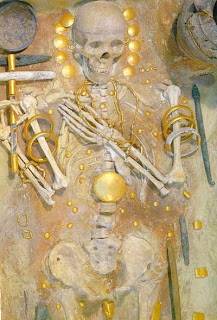 The Varna Culture existed in Bulgaria around 4400 BC - 4100 BC. It was roughly contemporaneous with other Bulgarian cultures like the Karanovo and the Lengyel which we briefly discussed on the Neolithic podcasts. The Varna however, is going to get some special treatment because they show signs of being a trendsetter in burial methodologies. Just think, 6,000 years from now you, if you are remembered at all, will be remembered for what they bury your member in. I'll explain in a second.

The two most important sites of the Varna culture are located in modern day Varna and Durankulak, Bulgaria. Both of these cities are located in the northeast of Bulgaria and are located on the coast of the Black Sea. The culture seems to have subsisted on farming, but they were also traders. Artifacts in both sites contain stuff from south in the Mediterranean like spondylus shells and flint and crafts made up north in the Volga region. The Varna made some pretty cool stuff to trade for their partners as well.

The Varna seem to have been the first to craft golden treasures. This shiny stuff made its way from Bulgaria all over eastern Europe. Their crafting of idols and elaborate burials lead us to believe that they had a pretty rich religious life and belief in the hereafter. Ok, so now on to the trendsetting of the Varna and their unique burial practices.

The Varna buried their people, or at least some of them with a whole bunch of gold. One grave at the Varna Necropolis had more gold in it than all of the other graves in the world at the time. This alone would make them a big time first in prehistory. But, they also seem to have been the first in Europe to bury an "elite" man. Prior to the Varna mostly women and children got more special treatment in burials. Some of these special tombs were placed beneath homes, indicating a special connection to their households. But, in the Varna culture, the men started to get the better posthumous treatment. 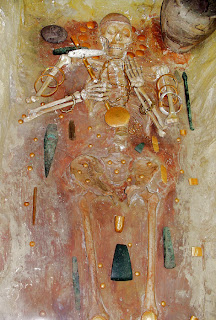 We now know that the Varna liked gold. What were about to learn is that the Varna could have served as an Austin Powers villain. The Varna have their own Goldmember. In one of the tombs found, this being of the oldest elite male burial in Europe, the deceased was buried with a whole bunch of gold, a war axe in his hand and sheath made of gold placed directly on his penis. Austin Powers would have had a handful with this precursor to the freaky-deaky Dutch Goldmember.

Marija Gimbutas, who we'll cover extensively in the next podcast of the Stone Age round up, furthers her theory on the pre Indo-Europeans and their matriarchal society with stuff like this. Basically what the Varna represent to her is the transition from a female oriented society and a male dominated one. Whether this is truly accurate or not is debatable and we'll put forth more evidence in the podcast, but it definitely marks a transition to a much more stratified society. And for this reason the Varna get our preferential treatment, which is worth a whole bunch of points you know. These points have now made them the Victorious Varna Culture (I would give them a trophy if I could).
Posted by Christopher Linehan at 7:47 AM