Burning down the house, A Talking Heads approach to society 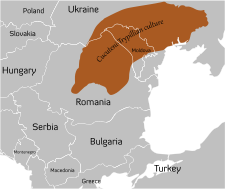 Burning down the House is one of my favorite Talking Heads songs, behind Psycho Killer, Give me back my name and Stay up Late. Stay up Late has sentimental value to me as my uncle used to sing it to me as a child. It might be this incident that has caused me to be a bit off kilter. Exposure to David Byrne at age 3 or 4 is bound to have repercussions. But, this is neither here nor there. We're talking about the most fascinating Neolithic European culture in the Cucuteni-Trypillian culture of Romania, Moldova and the Ukraine. 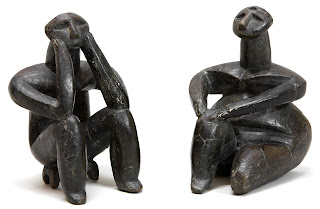 The Cucuteni-Trypillian Culture was glossed over on episode 4 of the podcast, Neolithic Part I. Basically, I could have created an entire podcast dedicated to this fascinating culture, but lumped it in with a bunch of other Neolithic cultures. There are 3000+ sites dedicated to this culture that spanned the three modern countries of Romania, Moldova and Ukraine. The culture was one that flourished on trade, but had a whole lot of other things going for it. First, it was immensely huge. Some of their settlements had more than 10,000 people living in them, making them much larger than their way more famous contemporaries in Mesopotamia. Second, they had an incredibly rich religious life. One aspect of this religious life can be seen in their desire to burn down the house.

Every 70-80 years or so, the Cucuteni-Trypillian culture would leave their village, burn it to the ground and then reconstruct it in the exact same fashion as it stood before the burning. Most modern people would say that this is crazy and counterproductive. But a study of their religious convictions would indicate that they did this because of their belief in the cyclical nature of life. Many of the tombs of the Cucuteni-Trypillian culture were egg shaped. Marija Gimbutas, an expert on this, states that these tombs and the burning indicate a belief in some sort of religion that advocated for rebirth. The burning of the settlements was a celebration of death. This wasn't, according to her theory, a morbid religion, but that death was necessary element for a rebirth, and thus something to be celebrated. If this theory is to be believed, then the burning of the villages was a religious celebration intended to bring lost loved ones back to life. Most of the sites show this ritual burning, but none more so than Poduri site in Romania which is believed to have been burned thirteen times. This shows a remarkable dedication to this ritual that most modern cultures could never accomplish.
Posted by Christopher Linehan at 7:26 AM