The Madness of Christopher Smart 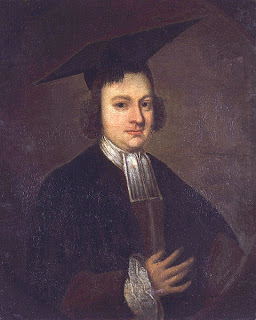 On May 6, 1757 Christopher Smart was admitted, and by admitted I mean forced into, St. Luke's Hospital for Lunatics as a "Curable Patient". Christopher Smart was an English writer that began his poetic career very early on. At the age of four he penned a poem about how to defeat a rival to win the affections of a twelve year old girl. From this early start he began to craft a number of works that would eventually lead him to the lunacy hospital, a place that was undoubtedly unpleasant.

Smart's poetry was mostly of a religious nature, but he dabbled in other forms as well. He wrote a scathing mock epic poem called The Hilliad to critique and belittle another English author, John Hill. But picking on this botanist turned literary critic was not what landed him at St. Luke's. What landed him at the asylum was Smart's quarrels with his father-in-law, John Newbery. Newbery was a publisher and forced Smart into a 99 year contract that effectively forbade him to publish with anyone else. The stress of this contract seems to have led to a couple of possibilities, each of which could be explained as the Madness of Christopher Smart, that led to a new poetic style in his celebrated works Jubliate Agno and A Song to David. These poems left the normal styles of 18th century England and are seen as introducing a new and introspective religious fervor. Whatever the madness was, it helped Smart to write some pretty good poems.

Possibility #1 - Christopher Smart was a talented poet that received good remarks from fellow writers at the time, but the poetry was not sustaining him and his family. He decided to make a translation of Horace into English, a degrading and disappointing venture for someone who could write so well. This however didn't pay the bills either so he was signed by Newbery to write for a weekly publication for the remainder of his life. This literary imprisonment led to a nervous breakdown and he entered into various asylums that furthered his depression. Out of this depression came the two aforementioned works.

Possibility #2 - After not having the financial success he was hoping for and being forced into that draconian contract by his father-in-law, Smart took up drinking. The drinking would lead to bits of "madness" that ended up landing him in the asylums where he became depressed. The depression then produced the new poetry.

Possibility #2, corollary B - The drinking led him to have outbursts when he was drunk. His outbursts were expressed in signs of over-religious behavior. He took up praying without ceasing and interrupted meetings and gatherings with loud, drunken expressions of prayer. This embarrassed the crap out of his father-in-law. Newbery had him confined to the asylum as a punitive measure.

Possibility #3 - Failure led Smart to become intensely religious. He expressed his newly intense religious devotion publicly, leading to the stogy English becoming uncomfortable with his sensibilities. They used these outbursts to classify him with a curable madness. Smart indeed wrote, "for I blessed God in St. James' Park till I routed all the company...for the officers of the peace are at variance with me, and the watchman smites me with his staff" (Jubliate Agno). They locked him up because free religious expression is embarrassing and dangerous.

Possibility #4 - Smart was in fact, afflicted with madness.

Either way, the madness of Christopher Smart led his poem A Song to David to be regarded as the ramblings of a madman during his life and Jubliate Agno wasn't published until the 20th century. After this publication Smart's entire body of work was reassessed in a new light and this is when the madness of Christopher Smart was reassessed and his poetic genius was heralded anew. But, it still didn't make him any money...
Posted by Christopher Linehan at 12:59 PM