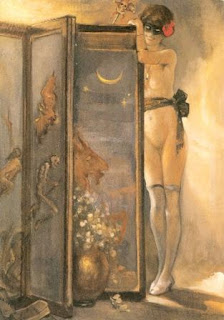 Jan Frans de Boever was a Flemish painter, born in Belgium. He passed away today 63 years ago in 1949 for the mathematically challenged. He was an incredibly self-absorbed man, considering himself the best Belgian painter ever. Considering that Belgium has produced incredible artists like Pieter Bruegel the Elder and Peter Paul Rubens de Boever might have been full of other things other than himself. While, Jan Frans de Boever was incredibly talented and I do enjoy his work, his egotistical behavior alienated himself from most of his peers and he became reclusive.

In his reclusiveness and self-absorption he created his own style that was pretty, how to say it nicely... dirty. He painted morbid paintings of prostitutes and scantily clad women as objects of evil. Considering he was probably spurned by numerous women in his loneliness, his depiction of them as lustful temptresses using men as toys might be a bit of sour grapes. However, his best work were his depictions of Charles Baudelaire's erotic poems Les Fleurs du Mal. He created them for an exclusive client who paid him handily. The last few decades of his life were lived out in America. Considering he died nearly 70 years ago he probably looks a bit like this painting here below nowadays. 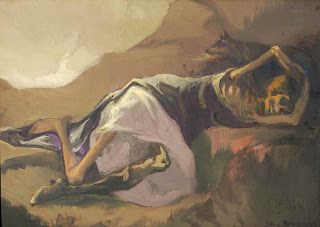 Posted by Christopher Linehan at 7:42 PM