The Disputable Prehistoric History of Finland, the earliest humans of Finland were Snorks 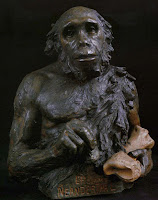 Neanderthals were the barrel-chested people that roamed Europe before modern human beings showed up on the scene towards the end of the Pleistocene era. The Mousterian Culture was the primary culture of the Neanderthal existence. This Mousterian Culture stretched all over Europe, but generally stayed out of the most northern bits mainly because it was absolutely and unquestionably too cold to live in. Wait. What? Wolf Cave?

Wolf Cave is located in Kristinestad, Finland a territory in Finland's southeast more or less. In 1996 the process of digging this cave out a bit more was undertaken so that tourists could come and check the place out. Touring Finland is a fantastic idea. Touring Finnish caves is just a bit of gravy on top of homemade, non-lumpy mash potatoes. Who doesn't enjoy a spelunking vacation? Anyway, the Finnish government began to dig out this cave to raise tourist dollars and stumbled across some funny looking stuff. After further examination an argument broke out. Some experts were amazed at the find, while others were bewildered at their colleagues' amazement.

Those who were amazed decided that the 200 or so artifacts, more than 600 waste items and numerous instances of burnt stones indicate that Neanderthals, who did not, according to most estimates, live in Scandinavia and other parts of northern Europe, showed that Neanderthals belonging to this Mousterian Culture had been in fact, living in Wolf Cave at around 130,000 BC. This find would completely altar the understanding of Neanderthals and their environment. However, it gets even better.

The site has been excavated over and over again since the initial finds in 96. They've identified 8 archeological layers. Some of the earliest layers have produced (to the amazed, not to the bewildered experts) evidence of Clactonian activity. Did you just read what I said??? CLACTONIAN!! OMG! CLACTONIAN. I had to Google Clactonian when I was reading the article about this archeological site. I hadn't the slightest idea what it was. But, the Clactonian was a culture (much like the Mousterian or any subsequent Early Modern human culture we've covered here and on the podcast), but not one of modern humans or even Neanderthals. The Clactonian Culture was a culture produced by Homo Erectus dating back to 400,000 years ago.

There is however a simple solution. While Wolf Cave has remained controversial and disputable since it was found in 1996, we here at the History of Europe Podcast Blog are about to right the ship. We shall change the disputable to indisputable, the questionable to the unquestioned and the ludicrous to the ridiculous, as in ridiculously good-looking theoretical archeo-anthropological geologism that we will become famous for someday. So here it is: 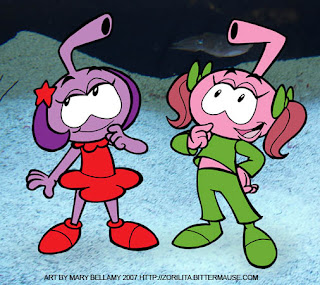 Neanderthal was shorter and more robust than modern humans, but equally as adaptable. The freezing cold of the Pleistocene era was occasionally interrupted by periods of mild warming in the climate. This warming would lead to a retreat in the glaciers. Thus it was during one of these interglacial periods that a Neanderthal tribe ventured north and settled in a warmer Finnish coastal region. Unfortunately though, the weather turned sour and it got cold again. The Neanderthal tribe barely survived until another warming period occurred, at which point their temporary shelters broke through the ice and they sunk to the bottom of a lake. Miraculously though, they survived this sinking and developed a breathing tube on the top of their head and began to live under water. Children of the 1980's would recognize this Mousterian culture as the Snorks. The Snorks would go on to create all of these artifacts before being canceled for disappointing ratings. But before their cancellation they would create all of these things that would baffle scientists eons later. And that my friends, is how we create theories that make us famous.

Posted by Christopher Linehan at 8:18 PM