On this day in History, The Battle of Rovine 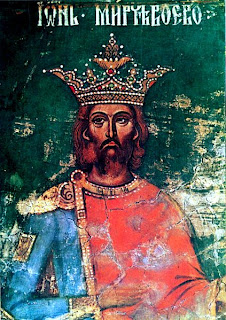 The highly unstable region of Wallachia (modern day Romania) grew out of a rebellion against the first king of Hungary sometime in the late 13th, early 14th century. This independence was all fine and dandy but they found themselves in the middle of constant competition for land. The Hungarians, the Serbian Empire, the Bulgarians, the encroaching Ottomans and even the decrepit Byzantines were all players in the area. But at the time of the Battle of Rovine, May 17, 1395, Wallachia was about as stable as she was ever going to get, under the good care of the Warlord Mircea the Elder. But, the good warlord had managed to enrage the Ottoman Empire by aiding the Christian Hungarians against the Muslim Turks.

Well, Sultan Bayezid I wasn't too thrilled with this and took up 40,000 men and impressed 8,000 or so Serbian vassals to go up into Wallachia to teach Mircea a lesson. Mircea was able only to muster 10,000 troops so he avoided open conflict for awhile until the jig was up on May 17. The battle was fought along the banks of the Argeș River in Southern Romania in a spot where the numbers game wouldn't absolutely hobble the overmatched Wallachians. As the Ottomans and Serbs advanced, the Wallachians unleashed a hail of arrows that decimated Ottoman lines. After another hail of arrows the Wallachian cavalry came in and caused mass panic. Some of the Ottomans fled over the Danube to the south. The most powerful lord of the Serbs at the time, Marko Mrnjavčević was killed in battle. But, many Wallachian troops were lost in the fighting. While the Ottomans and Serbs were thoroughly routed, the undermanned Mircea was forced to flea Wallachia after the battle. The Ottomans were able to install an usurper to throne named Vlad Uzurpatorul (I'll let you guess what Uzurpatorul means...). Within three years time Mircea was able, with the backing of the Hungarians to crush Vlad and retake Wallachia. During his reign over Wallachia, Mircea consistently stopped the onslaught of Ottomans crossing the Danube. And, at a time of political turmoil in the Ottoman Empire, teamed up with some fellow Christians and actually marched into Ottoman territory. At the height of his power, Mircea was actually able to install his candidate as a co-Sultan of the Ottomans. For all of his success against the Empire though, Mircea was wise and made peace, ensuring the independence of Wallachia for a short spell.
Posted by Christopher Linehan at 7:46 PM