The rather unhappy Lepenski Vir Sculptures

The Lepenski Vir culture was a fascinating prehistoric culture in Europe. As mentioned on the Mesolithic podcast, they lived a pretty sedentary lifestyle compared to their contemporaries. The group seems to have migrated from present day Czech Republic and settled along the banks of the Danube in today's Serbia. They became a river people. They built their houses by the river. They fished the river. And they began to worship the river. The Lepenski Vir culture was advanced for its time. They planned their villages in an organized way. Their houses were built using advanced techniques. Once they had their houses built and their fish done fished they turned to religion. They created a fairly complex religion. The evidence comes from a lavish grave site outside of the village, ceremonial burials of what appear to be elders in the fireplaces of some homes, and the sculptures. The sculptures are crosses between humans and fish. Personally I think they all look sad. 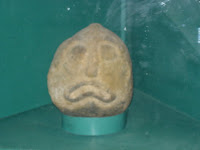 This one above is unhappy because he is constipated.

This one on the right just found out that his gold fish had passed away.

This one had his lunch money stolen.

This poor guy was told two days too late about a buy one get one free sale at Sam's club.
Posted by Christopher Linehan at 7:29 PM