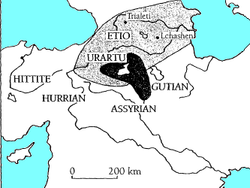 As we continue to study the history of some of Europe's disputed states we return to the Caucasus in the region known as Nagorno-Karabakh. Currently Nagorno-Karabakh is a disputed territory claiming independence from Azerbaijan. But, way back when in Prehistory the region was the center of a prehistoric culture that spread out from Nagorno-Karabakh in Azerbaijan to Armenia, Georgia, Turkey and four Russian subjects: Chechnya, Dagestan, Ingushetia, and North Ossetia. It is known today as the Kura-Araxes culture, corresponding to the two rivers that flank its homeland.

The Kura-Araxes culture lasted from roughly 3400 BC - 2000 BC. It began as a humble type of civilization subsisting on some farming and mostly cattle. They original built small, round homes that were often grouped together behind some sort of earth and stone fortifications. Hey, this in the neighborhood of most of the projected Urheimats so they were eventually going to have to deal with those violent Indo-Europeans. You can understand why they built walls. 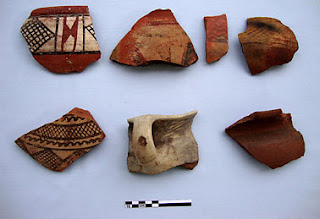 But, their humble beginnings would give way to a much more lavish lifestyle as the Kura-Araxes people became great traders. They traded with Mesopotamia and Asia Minor. There is even evidence that some offshoots of the Kura-Araxes ended up in the Levant after the fall of the ancient Akkadian Empire. What they had to offer had to pretty good considering some of their artifacts have been found flung between modern Israel and Chechnya in Russia. So what did they bring to the table?

First and foremost they brought pottery. Their pottery was super distinctive. It was black and red with geometric ornamentation all over it. They also produced wheeled-carts which when they weren't hauling awesome pottery to trade all over the Ancient Near East and Eastern Europe were probably being traded themselves. Eventually the Kura-Araxes would take up metallurgy and became pretty good smiths. They worked with copper, gold, silver, tin and bronze, adding metal goods to their already impressive arsenal of trade goods.

We've mentioned the Kura-Araxes before way back on May 6, but I thought since we're studying some disputed regions I'd mention them again. But, we've learned quite a bit about history since May so rather than regurgitating what I wrote earlier I thought I'd add something new. Although we're focusing on the History of Europe it's impossible to look at Europe in complete isolation, especially when you're dealing with either the Mediterranean Cultures or the Caucuses. This is because there was massive cultural exchange between these European Cultures and the Asiatic ones. The Kura-Araxes were intercontinental traders and it might be good to mention some of their Asiatic dealings. As you can see from the map above the Kura-Araxes culture dealt with some heavyweights of the Ancient Near East including the Assyrians, the Hurrians and the Hittites, not to mention all the other unlisted Mesopotamian giants.

The traders would have gone up and down the established trade routes and brought a whole bunch of wealth to the Empires of the day, Akkadian, Assyrian, Babylonian, Mittani, etc., etc. But as the traders went along the routes they might have become familiar with the areas and liked it enough to eventually settle down. Often in this period we talk about how Asiatic cultures (and Egypt) often influenced later European ones. But, the Kura-Araxes might have flipped the script and decided to settle down in modern day Israel and become the culture known as the Khirbet Kerak. Khirbet Kerak is located on the Sea of Galilee and was established sometime around 3000 BC and lasted for about a thousand years (the end of the Kura-Araxes culture). The site is similar enough to Kura-Araxes cultures that have led some to believe that it was a trading colony at the far end of their world, but still within their world. Basically, some people think that this Caucuses culture settled down in Israel for about a thousand years before abandoning the site in 2000 BC. There's similar pottery, similar circular homes and fortifications that could match the Caucuses sites. But, other than that it is conjectural. Although it isn't known for certain, it's interesting to see that European might have had a big influence on the Near East as the Near East most certainly had a big influence in Europe at the time.
Posted by Christopher Linehan at 8:54 PM